Teenage Mutant Ninja Turtles: Shredder’s Revenge is a neo-retro beat’em’up that takes place in New York with the whole brigade of the four Ninja Turtles, and with the bonus of our good old Master Splinter and the journalist April. Our preview of the title announced only good, but what is it really? Are we dealing with the essential game of 2022? That’s what we’re going to see together.

Testing conditions: We went through the end of the game in about 10 straight hours on PC, trying out all the characters but focusing on Leonardo for his balanced stats.

Where is the script? 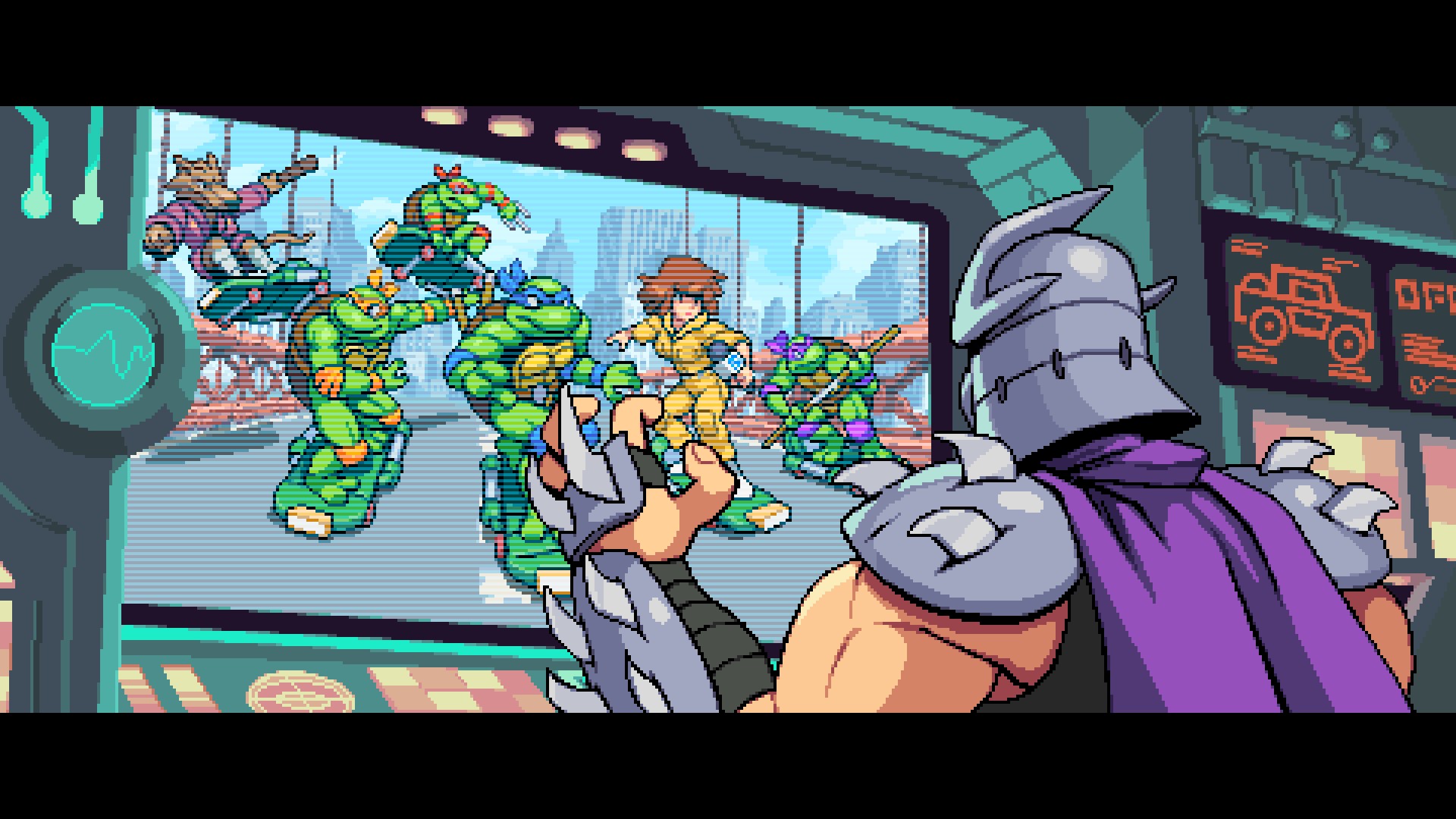 When we talk about neo-retro, on the script side, we are more on the retro side than neo. Suffice to say that there is very little history in this title. Thanks to the short cinematics at the beginning of the level as well as at the end of the level (with a frozen image in 21/9 which gives a rather pleasant cinematic aspect), we understand that Shredder is building a kind of ultimate monster that you will try to continue throughout the game. More basic than that, you can’t do.

And we told you pretty much everything. Unfortunately, there are very few lines of dialogue and the game clearly deserves a little more depth at this level. There was perfect ground in terms of AD, gameplay and music to create a universe and an original story with this Teenage Mutant Ninja Turtles: Shredder’s Revenge, but we don’t find any of that, and that’s a shame. We expected a little more depth after our preview which already announced the color. And in the end, the game does not involve us at any time with respect to its scenario.

In addition, the side quests are just as basic, the secondary characters are numerous, and apart from “go get my VHS tape or my disgusting insects” (collectibles with very little interest), we will have very little interactions with NPCs. More generally, the game is quite old-fashioned in its mechanics, and this is felt even in its non-existent scenario.

For once Shredder trains his minions 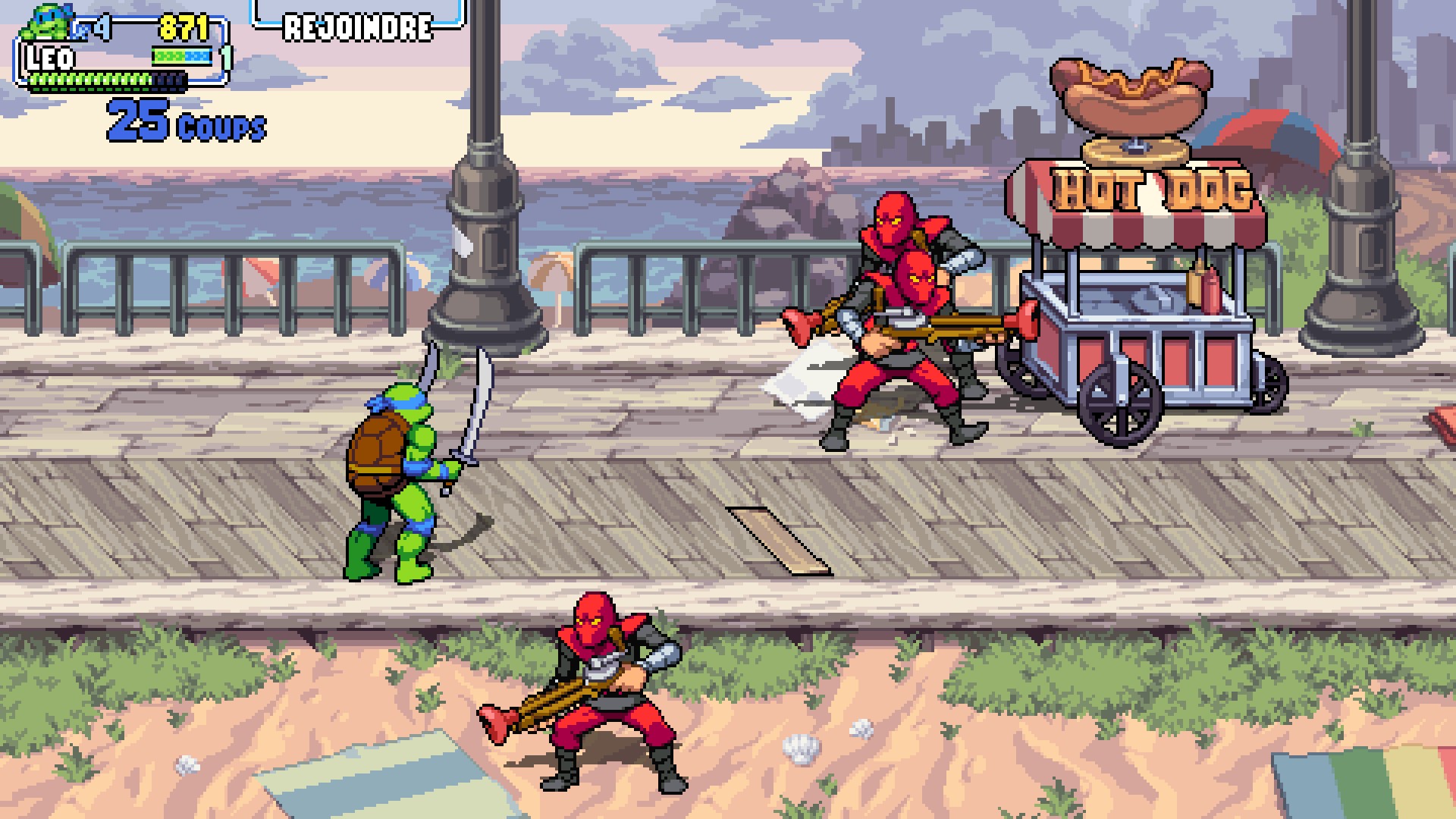 To continue on the line of apprehensions (this time unfounded), we had a slight fear that the enemies were a little too redundant and that the fights would become much too repetitive over time. At the same time, how to decline the same minion in several colors with different abilities more than 10 times for example? And against all odds, it is this tour de force that Tribute Games has managed to do in Teenage Mutant Ninja Turtles: Shredder’s Revenge.

Indeed, all the enemies are all very inspired: Shredder’s minions have variants that put us in more and more difficulty throughout the game. We have, for example, basic enemies with bare hands, minions fighting with suction cup guns, through minions with triple kunais that disappear and reappear behind our backs. But they always have a rather endearing humorous side which humanizes them a little more.

We can meet them during our adventure while cooking, doing magic tricks or playing sports. It’s always fun to see the title make fun of itself, and this part of humanization in enemies that we beat in the chain is pleasant to discover. And even outside of Shredders’ minions, the monsters are particularly tough, and the more we advance in the game, the more their diversity of movement puts us to the test. Maybe a little too much.

We don’t move at the same pace 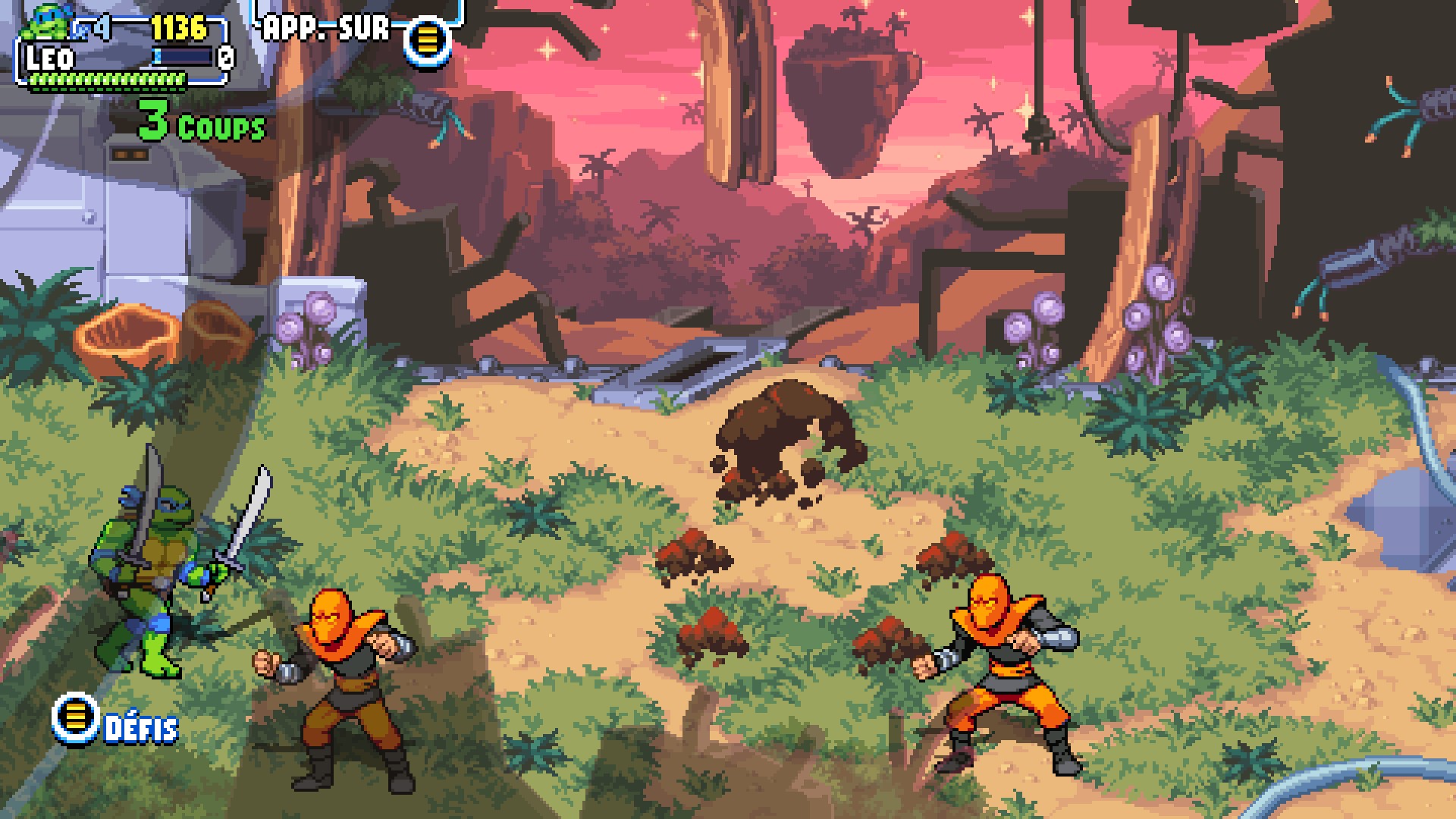 Unfortunately, as we said, the enemies evolve more and more in terms of diversity and difficulty, but on our side it’s dead calm. So of course, there is a tutorial at the start of the game that shows you all the possible combos (which are numerous by the way) but apart from a few overpowering techniques that are available from the start of the game, that’s it, we’ve just done the turn of the entire gameplay concerning the playable characters.

The enemies therefore evolve significantly in terms of difficulty and we quickly feel the difference in the last levels which are very hard to grasp. Where the beginning of the game was relatively easy, the difficulty wall is there after a few hours, and we feel a real sense of frustration by not evolving at the same pace as the overall game.

There are no gameplay updates, new attacks or ability boosts like runes or other artifacts that would have spiced up the experience a little more. No, none of that, you will have to be content with the bare minimum to get to the end of this Teenage Mutant Ninja Turtles: Shredder’s Revenge.

Nevertheless, the gameplay is still very neat. The combos are very satisfying to place and you will have to learn them carefully to be able to reach the end of the game. At least, for those who were looking for a challenge, you are in the right place.

More beautiful than a triple A 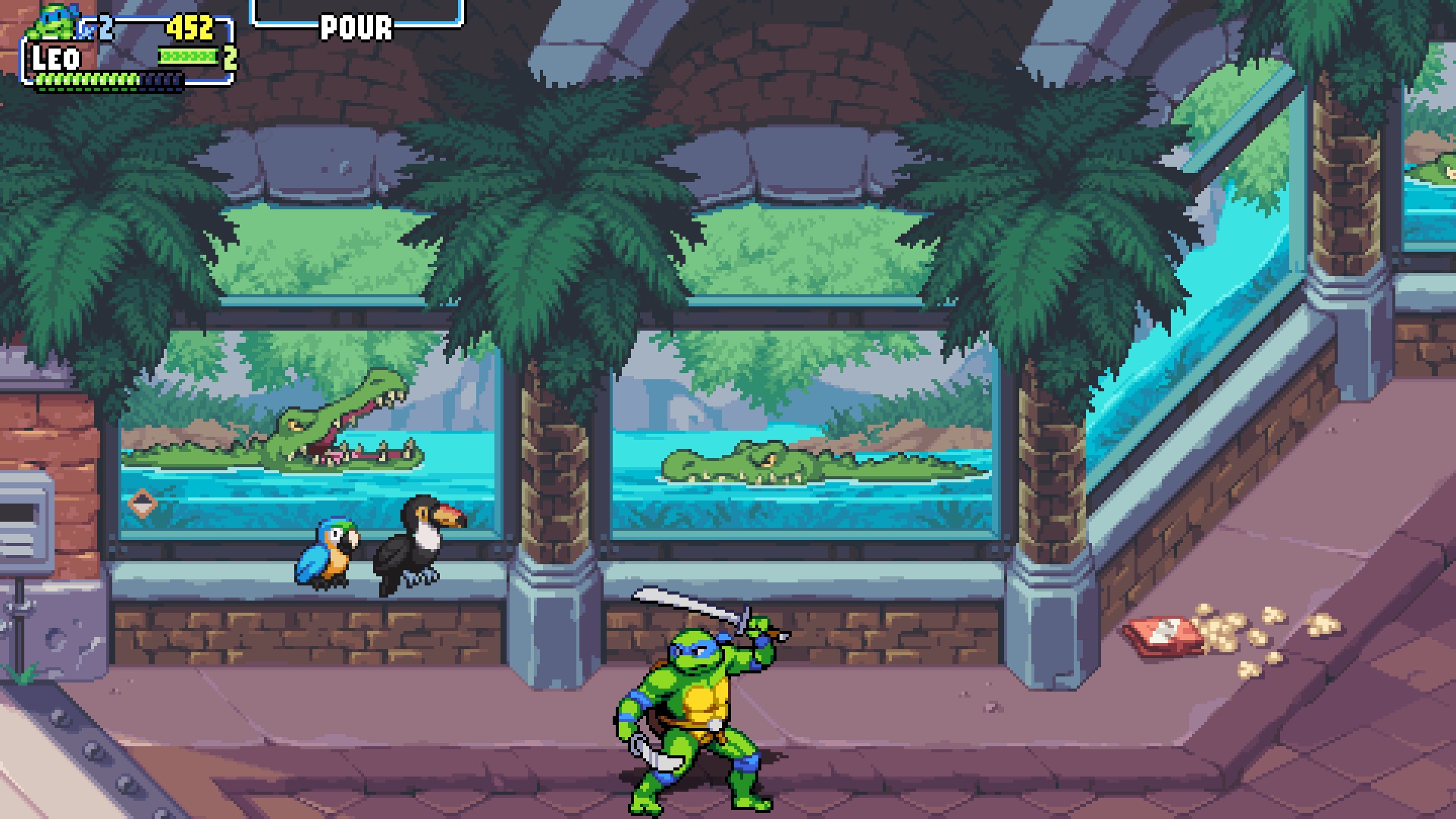 When we talked about neo-retro in the title of the test, it is especially vis-à-vis the artistic cachet which is absolutely magnificent, and on all levels. The sets are extremely rich in detail, and you really get this feeling that every place in the game has been created with a certain meticulousness and attention to detail, and there is very little redundancy in the environments.

For a 2D game in Pixel Art, Teenage Mutant Ninja Turtles: Shredder’s Revenge is a very pleasant graphic nugget to explore. We would also have liked to have been able to go back in each level to be able to explore everything, but unfortunately, once the scrolling is done to the right, impossible to turn around. It’s so frustrating for such a beautiful game! It’s a mechanic necessarily inherent to the genre that pushes the player to redo the level several times to discover everything, but it’s still quite a shame.

On the other hand, there is this cartoon atmosphere that reigns throughout the game. This way of cutting out the scenes and levels, of presenting the bosses, or the famous 21/9 shots that we mentioned earlier. Finally, if we couple this to original theme of ninja turtles and music that is of rare relevance (so much so that the soundtrack was released on vinyl), this gives us an almost unavoidable titledespite its weaknesses.

Teenage Mutant Ninja Turtles: Shredder’s Revenge ultimately brings nothing new, whether in terms of gameplay, history or bosses who are unfortunately not memorable. It pays very good homage to many other retro titles, for better or for worse. The title of Tribute Games is a very good discovery but it suffers from the same absurd problems that we could feel in the productions of the time, which makes that we really have a feeling of old-fashioned game on many aspects. But it shines with a very strong light thanks to its absolutely magnificent artistic direction (too bad we can’t contemplate the levels a little more) and its music of undisputed accuracy. We will not forget the minions of Shredder who made us laugh more than once. And for that alone, the game is worth the detour.