You may not know Neocore Games, but we owe this Hungarian studio several titles associated with the King Arthur and Van Helsing licenses. However, the team’s best-known game is Warhammer 40K Inquisitor-Martyrreleased in 2018. The developers are now back with King Arthur: Knight’s Tale, whose early access ended on April 26. It is a turn-based tactical role-playing game in the vein of XCOM and Gears Tactics, with the entire story set on the side of Avalon. So, are the Knights of the Round Table good company? That’s what we’re going to see.

A rather weak scenario within a gripping adventure 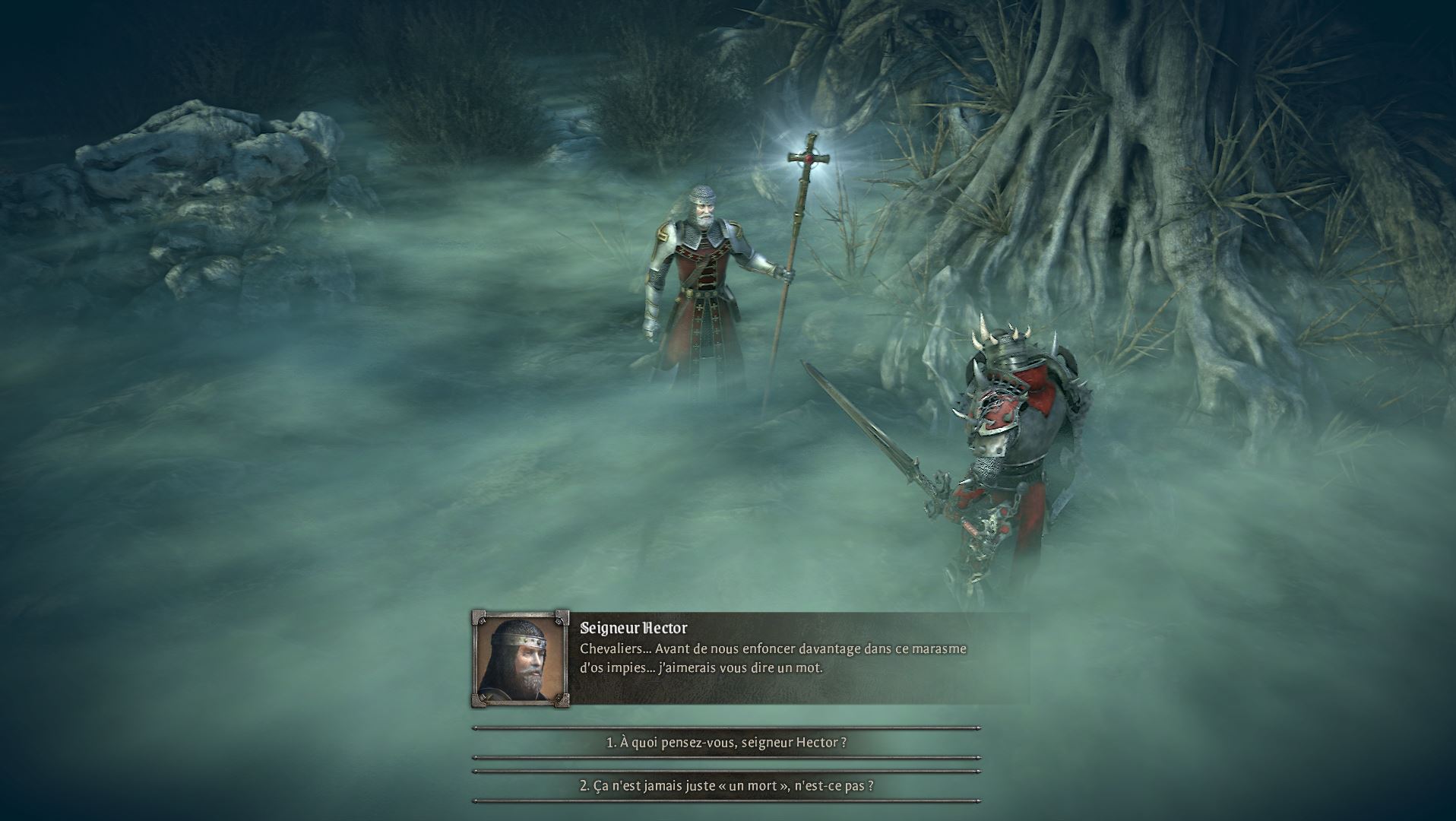 It all starts with a cutscene, during which we learn that Arthur and Mordred, his sworn enemy, killed each other. Brought back to life on the island of Avalon by the Lady of the Lake, who, we will say right away, does not seem to know what she is doing, the two mythical adversaries will however meet very different fates. Indeed, Arthur’s soul has been totally corrupted, divided, and the forces of darkness are about to descend on the world. It is therefore in the skin of the enemy, Mordred, that the player begins his adventure. Summoned by the Lady of the Lake to kill Arthur definitively, Mordred will quickly discover that, ultimately, he could become the new lord by bringing Camelot back to life. Besides, we’re not going to lie to each other, if the adventure is rather gripping thanks to the characters encountered, the writing is quite weak. But you will understand, this representation of the Arthurian myth is quite dark, and it feels very quickly.

Whether it’s the NPCs, often plagued by their mistakes, their failures and their desire to do well, the Picts, the Lost or the forty different enemies that we encounter, everything is dark, sad, cold. The art direction follows suit with hues of gray, brown, and green reminiscent of the early 2010s in gaming. Unfortunately, King Arthur: Knight’s Tale technically fishy and, without being awful, looks downright dated. But whatever, Camelot and Avalon are in danger. So attack. 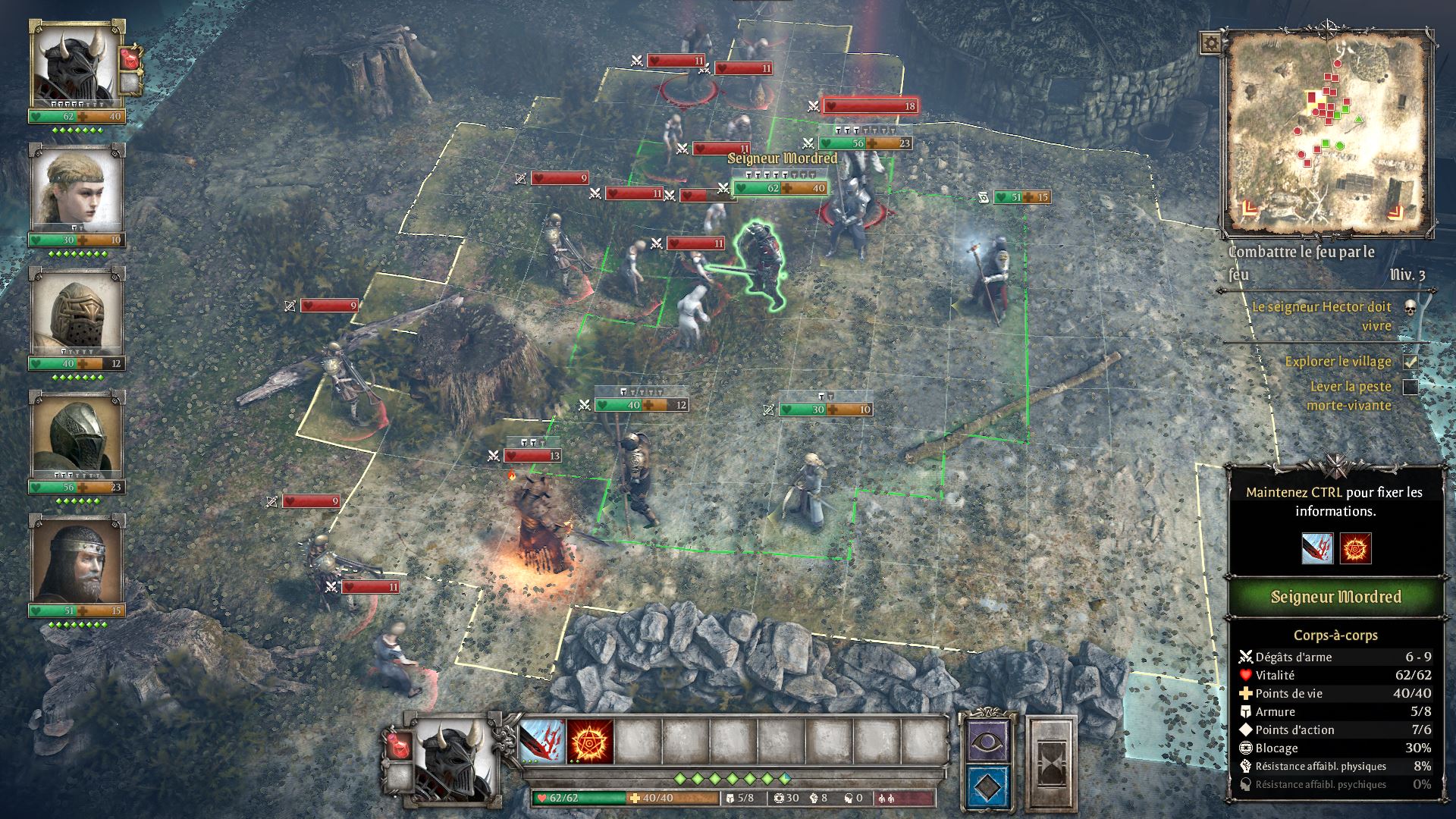 Like any self-respecting XCOM-like, King Arthur: Knight’s Tale offers a turn-based tactical gameplay. During the fifty missions offered outside the endgame, players can take four characters with varying skills, which range from magic to changing status, passing through great sword swings, shooting arrows, bolts, stealth movements and support spells. You then explore a semi-open area, with chests, altars and campfires to replenish your health. Sometimes other characters will join the party, whether temporarily or not, but we’ll get to that. When you encounter enemies, you switch to the traditional grid mode, and each character, ally or enemy, will be able to perform actions according to the number of points he has, or even decide to store them for later. We can therefore move, attack, use skills, or possibly seek one of the few covers.

thereupon, King Arthur: Knight’s Tale sin. The Level design changes very little during the campaign and lack of inspiration. We will often content ourselves with putting characters using distance in position, sending melee characters into contact, or placing them in vigilance mode so that they perform an attack of opportunity if an enemy passes near. The tactical dimension of the game is essentially based on management of the number of enemies, often important, on the ability to land the blows in the right way, and on the ability to take the blows. Because each character, regardless of class from one of the five available (warrior, archer, thief, arcanist, knight) has two gauges, and sometimes additional points.

The first bar is that of vitality, the second is assimilated to resistance, while the points are those of armor. Thus, the hits received remove points, then attack the resistance, before lowering the vitality, causing injuries and, potentially, death. It’s necessary pay close attention to how you strike. Indeed, a blow from the front will be less effective than a blow from the side, and much less violent than a blow from the back. We understand all this fairly quickly, so don’t worry.

For their part, the enemies are positioned correctly, do not hesitate to swoop down on the same member of the group, and can sometimes do considerable damage. In Story mode (easy), fights are a real formality. In normal mode, you have to wait for the last quarter of the game, which occurs around 8 or 40 p.m. depending on whether you favor the main quest or not, to see real tension appear. On the other hand, as soon as you raise the difficulty slider beyond these two levels, you start to squeak seriously. The fights can become very expeditious if you don’t pay close attention to its placement and the sequence of abilities. We therefore strongly advise fans of the genre to immediately embark on difficult, even roguelite mode, which limits backups and makes deaths most often permanent. 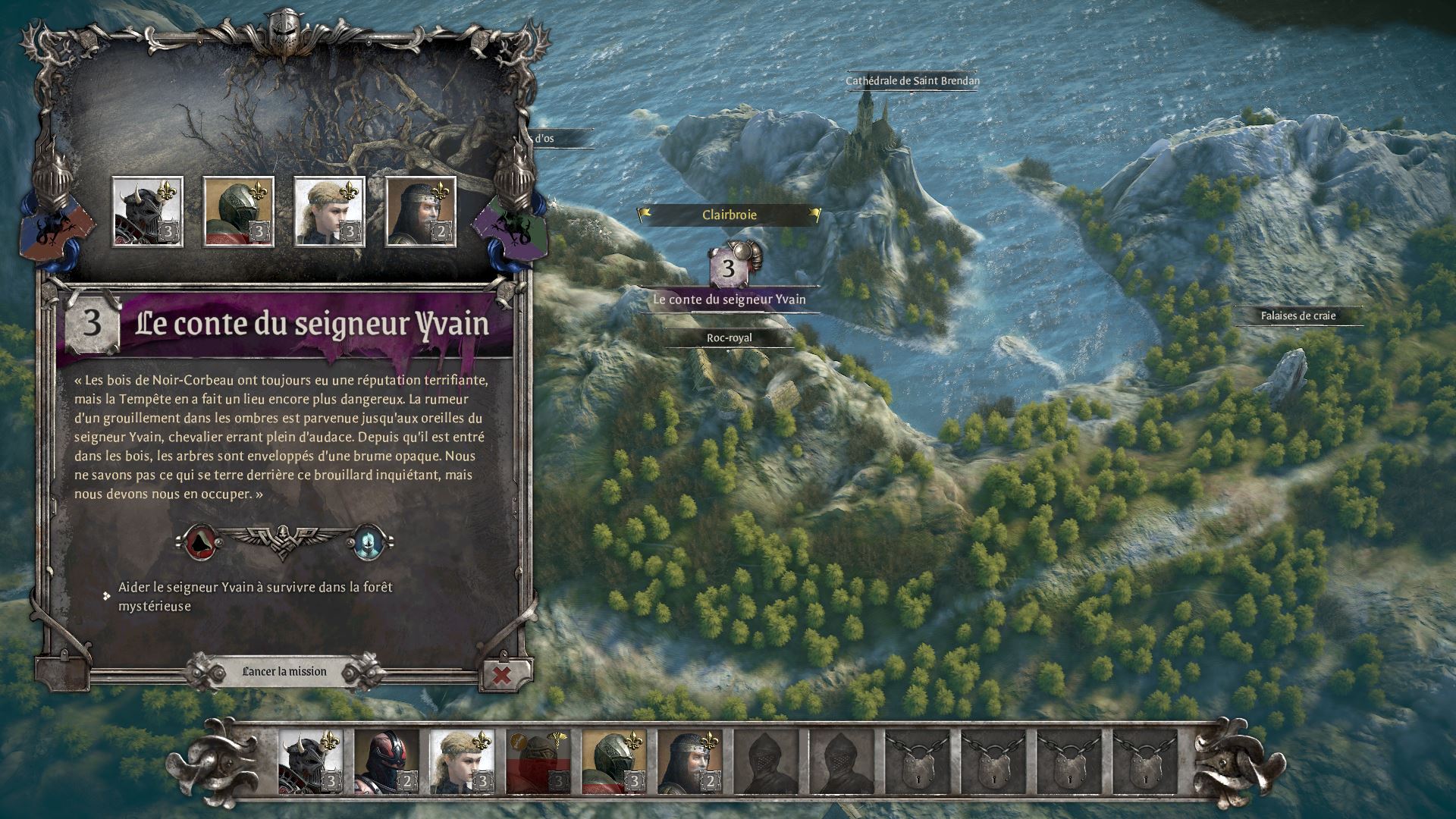 If the title made its combat system its only argument, it would be a little light. It would be efficient, well designed, but classic and quite repetitive. Fortunately, King Arthur: Knight’s Tale offers many other mechanics, which give substance to the experience. Throughout the missions, which, as we have said, have a structure that repeats quite a bit, we meet many knights of the Round Table, druids, enchanters, fairies, witches and monsters known to legend. We will thus meet Perceval, Leodagan, Guenièvre, Yvain, Gauvain, Merlin, Bohort etc., all of whom have a fairly developed background, sometimes pushing them to be absent or to refuse to participate in a mission based on their trait.

They will be able to join the Round Table and they will therefore be available, if they are not dead or too injured, to carry out the missions. In total, one thirty characters can be part of the adventure, but be careful: you can only take four of them per mission, and only 12 of them can be “active” at most. It’s up to the player to form their group as well as possible in order to take advantage of their skills. At the end of each mission, or while exploring areas, objects and experience points are awarded to characters, that can be improved. We can therefore improve the equipment of the fighters, and each level taken unlocks skill points, to be allocated in various capacities, buffs and talents.

But throughout this dark epic, it will also be necessary to take many decisions, whether between two missions or during certain dialogues (sometimes badly or not translated, and generally quite classic). These choices will determine Mordred’s lineup, who remains the main character. It will therefore be necessary to choose between be a benevolent or tyrannical leader, follower of the Christian faith or the ancestral faith. If the choices can have consequences on the arrival or not of a character in the group, its survival or its loyalty, the alignment ultimately has little interest for Mordred himself. 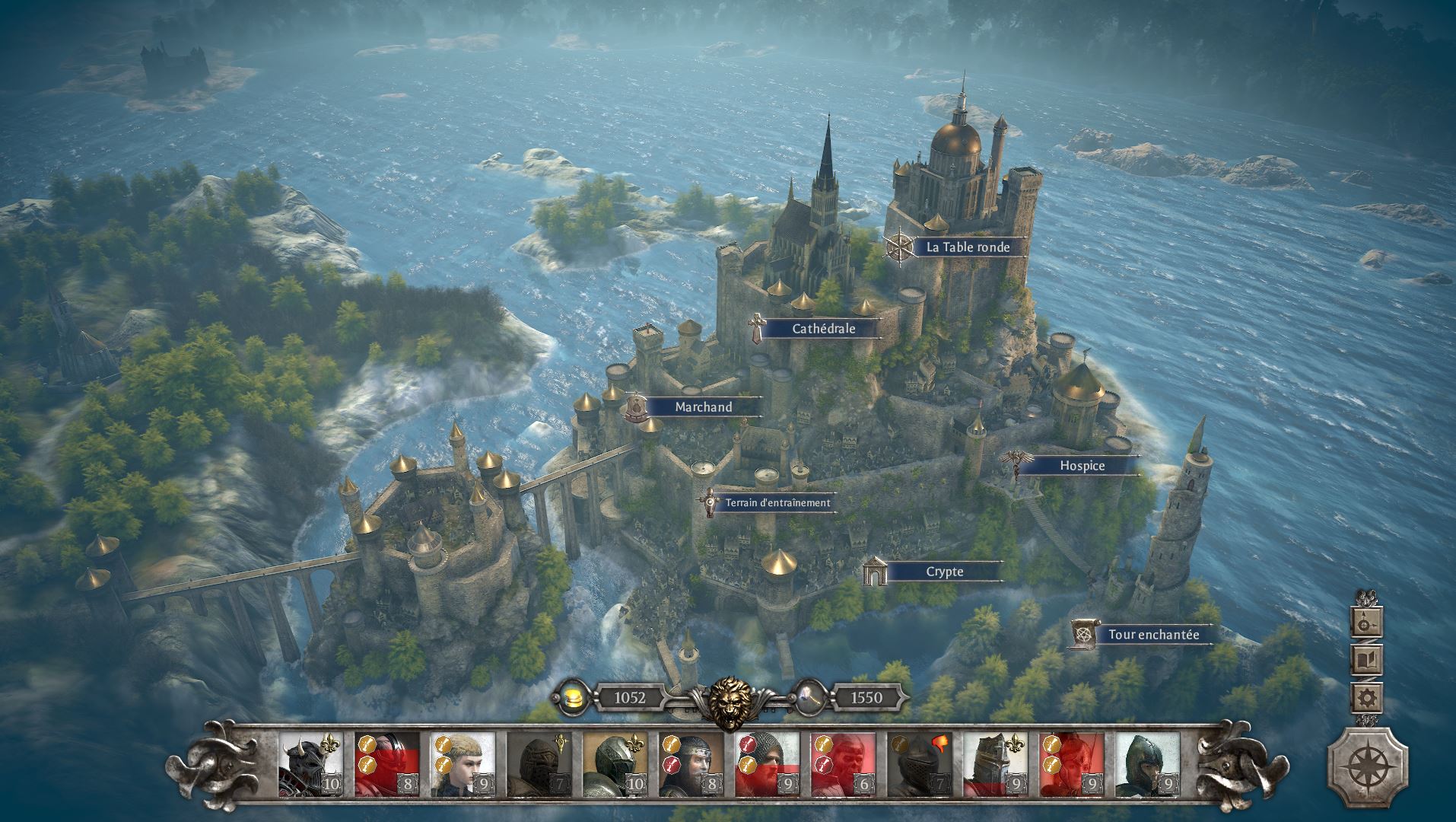 We were talking in the introduction about bringing Camelot back to life, and it’s not windy. In addition to the missions to be carried out, the player has, between these, access to the mythical fortress. And as much to say that it is important. By completing missions in King Arthur: Knight’s Taleby making decisions during various events (sending a knight to parley with a faction or subdue it, letting another settle his personal affairs, sending one to participate in a tournament, accepting a visit from a druid, deciding to leave a cult to develop or not), we recover resources and gold, which are used for many things, but also bonuses or afflictions.

At first, it is necessary rebuild Camelot Castle. We can thus develop the round table itself, assign specific roles to the knights, build a cathedral, a training ground, a merchant, a crypt, a hospice or even an enchanted tower. Every building can be upgraded, in particular by adding slots for the characters, and offering life-saving assistance. Training can improve a weak character, the cathedral can heal wounds, the hospice can restore vitality, while the round table can allow you to add active hero slots, issuing decrees against resources or enforcing laws providing permanent buffs.

However, each upgrade is expensive, and you have to choose them carefully. In addition, you will spend a lot of money by speeding up the recovery of characters, which can be healed for free if they are accepted to be unavailable for longer. It is therefore not not so much a management component as an addition to the progression system characters. That being said, it’s nice to see the fortress grow and to direct the rebuilding to how we play.